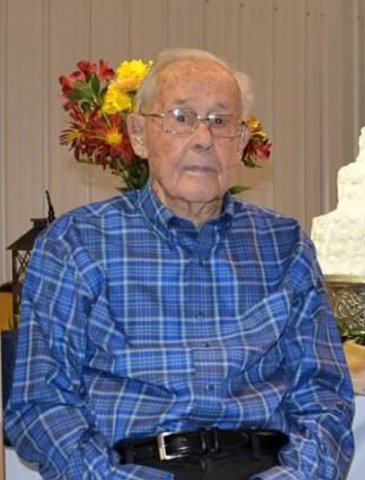 Funeral services for Byrd Stewart, age 103, of Morrison’s Crossroads will be held on Tuesday, October 8, 2019, at 11:00 AM at Union Baptist Church with Rev. Ed Halsey officiating. Burial will follow in the adjoining cemetery with Benefield Funeral Home in charge of arrangements.

Mr. Stewart passed away peacefully Saturday, October 5, 2019, at his residence.

The family gives special thanks to caregivers as well as Alabama Hospice.

A Randolph County native, Mr. Stewart was born on November 20, 1915, the son of William Newton and Anna McLeod Stewart. Mr. Stewart attended the Alabama School of Trades, now known as Gadsden State. Mr. Stewart was in the United States Army where he proudly served his country in World War II.  He was a member of Union Baptist Church and he and his wife served the community as owner/operators of Stewart’s General Merchandise for over 40 years. Mr. Stewart also retired from the Anniston Army Depot. He was also a Registered Black Angus cattle farmer. Mr. Stewart lived his life in service to his family, church, community, and country.  Mr. Stewart was preceded in death by his parents, his wife of 70 years, Fairy Morrison Stewart, eight brothers and three sisters.

Memorials may be made to either Union Baptist Church, c/o Wayne Wortham, 8137 County Road 82, Wedowee, AL 36278 or to Morrison’s Crossroads Fire Department, c/o Danny McCord, 711 County Road 167, Woodland, AL 36280 in his honor.  Online condolences may be expressed at www.benefieldfhwedowee.com.